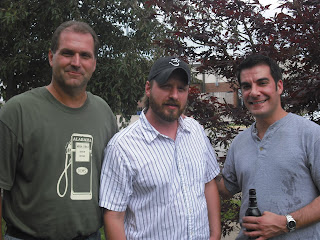 I caught the latest Noir@Bar on June 11th which is normally held at the Delmar Lounge, but on this occasion was moved to the Meshuggah Cafe. This was due to necessity but in my opinion this was a better setting anyway. It's quieter, spacious, and had A/C along with the same options of drinks as well as coffee. Now, I know Bukowski would be saying,"Hell No" to the nicer digs, he would cry out that a Dive is required for these type readings and he may be right. I can only speak for myself when I say I prefer Meshuggah Cafe as a permanent home for N@B. Now, on to the important stuff like the all star group who read that night and the Alumni who were in attendance as listeners. John Hornor Jacobs ,the author of "Southern Gods" read first and delighted with a short story of Southern Goth & faith and snake handling. Aaron Michael Morales, author of "Drowning Tuscon" followed up with a short story entitled "New Mexico Drive By" and I can only say it will go down in N@B history..along with Aaron, as one of the most memorable readings ever. This was the stuff for which legends are born...both good & bad. Fred Venturini, author of "The Samaritan" then read an excert from his book and a short story about idolizing serial killers. Very funny stuff and did I mention Fred has muscles and that Aaron really liked those muscles...well if you were there then you would know that. Finally, my friend Frank Bill, closed the night with a tiny bit of his soon to be released debut novel, "Crimes in Southern Indiana". This was terrific and a real joy to hear Frank read those same words he has so carefully crafted in this collection. Overall a smashing success !! In attendance were Matthew McBride, Matt Kindt, Dan O'Shea, and of course MC's & hosts Scott Phillips and Jed Ayres. Dont forget Jesus Angel Garcia will be reading from "BadBadBad" at the next N@B in August. Also, Donald Ray Pollock, author of "Knockemstiff" will be appearing at Subterranean Books on July 20th with his new book "The Devil All The Time".
Posted by Rod Norman at 1:10 PM 1 comments 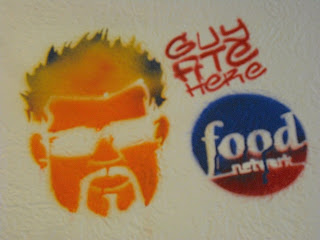 Since the summer has kicked in it seems that Guy Fieri has always been close by. It started when my wife and I made a quick trip over to St. Louis to meet Guy at Left Bank Books while he was promoting his new book "Guy Fieri Food" and then continued on as we traveled to Indianapolis for my Birthday and hit JERSEY"S restaurant (located in Carmel,In.) for lunch. Jersey's it seems had been recently reviewed by Guy on DDI&D's. The East Coast themed restaurant serves great food but is not a place to go if you want your food fast. Everything is made from scratch and you are given a sheet to read when you come in stating this and encouraging those in a hurry to move on. I had a chicken steak sandwich with ham shavings,bacon & cheese, and BBQ sauce, known as"The Red Sox Really Suck" that was wonderful. I also tried an appetizer of loaded chips (homemade potato chips) covered in cheese, bacon & BBQ. Great stuff. On the downside the service was also East Coast. We were ignored by our waiter who screwed up our order with another table, which added to our delay and which while he admitted his mistake he never apologized for it.Somehow I doubt they ignored Guy or screwed up his order.
Posted by Rod Norman at 8:54 AM 1 comments