Tonight, was my first screening of "TOM HORN", a 1970 film directed by William Wiard. Based on the true story of the legendary hero & assassin, Tom Horn, who was hung in 1903. The film stars icon Steve McQueen, who also executive produced it, and spent 4 years researching Horn's life. It was not one of McQueen's best efforts as an actor, but still the film was pretty interesting although not spectacular. I found the most satisfying moments of the film to be when Slim Pickens and Richard Farnsworth were on the screen. The film follows the latter days of Tom Horn's life. Once, considered a hero, as the man who captured Geronimo, and rode with Teddy Roosevelt and the Rough Riders, he is now reduced to an assassin, ridding the area of it's cattle thieves in any manner he sees fit. Linda Evans (of Dynasty fame) plays the schoolteacher who becomes Horn's lover, but McQueen & Evans give off few sparks. After Horn's usefulness is used up, he is set up for the murder of a 14 year old boy. A crime that he is wrongfully sentenced to death for. It was extremely interesting to hear about the Jullian Gallows used in Horn's hanging.This was something worth looking into in more depth. I especially enjoyed seeing J.P.S Brown, in the role of the Padre near the end of the film. The Padre's name in the film was J.P Brown,interesting. Mr. Brown is currently doing a Q & A with "Signs & Wonders", that will be posted in the near future. The film conveys the essence of the lawlessness of the Wild Wild West of the 1900's, where a man's gun was his only truth. Tom Horn was the type of man who would thrive in the world we live in today, as southern Ariz. & Mexico continue to be riddled with violent crime. After watching the film, I immediately began to do some research on Tom Horn's life. There is a website dedicated to him and on it, they offer inconclusive proof that Horn was not the killer of the boy and that they suspect their were actually two gunmen that shot him. I don't think Tom's time was alot different from now, in some ways. The law used him as a ways to justify their means and when they were done with him, they cast him aside. Sounds familiar.
Posted by Rod Norman at 7:51 PM 0 comments


I don't know how many people read this page on a regular basis, but if just one person will join me in this challenge, it will be worth it. I had a good friend suggest that I do something on this site to honor films that have been overlooked or forgotten. Well, with a film library of over 7,000 films to chose from here at my home, that won't be too hard to do. So, Ive selected 10 films to view & review between now & the end of May. My hope is that someone else out there who loves films as much as I do, will join me in viewing these films or at least will weigh in with discussion in the comment section of each film. The 10 films I've selected are quite varied. The first film I chose as a tribute to a man who actually appeared in it, J.P.S Brown. That film is the 1970 version of "TOM HORN", starring Steve McQueen. The other films to follow are #2, the 1947 film "DARK PASSAGE" starring Humphrey Bogart & Lauren Bacall and based on the novel of Philly's own David Goodis. #3 Wim Wenders terrific film "PARIS,TEXAS" from 1984 and written by Sam Shepard. #4 is the 1978, Terrence Malick treasure "DAYS OF HEAVEN" starring Richard Gere. #5 is a very overlooked film from 1997, "EVES BAYOU" which Robert Ebert called the best film of the year and stars, Samuel Jackson. #6 is one of my favorites from my H.S. days, "ANGEL HEART" with Mickey Rourke & Robert Dinero. #7 is based on Edward Abbeys book the "Brave Cowboy" and entitled "LONELY ARE THE BRAVE" starring Kirk Douglas. #8 is a film by one of the greatest independent film makers of all-time, John Sayles, entitled "LONESTAR" with Matthew McConaughey, Kris Kristofferson and Chris Cooper. All fine actors. #9 is from 1949 and gives a starring role to downtown Oxford,Ms. in William Faulkner's "INTRUDER IN THE DUST". The final film #10, is based on Ross MacDonald's novel "The Drowning Pool" which stars Paul Newman and his wife Joanne Woodward.

If you have any of these films on hand, or you have a NETFLIX account, I hope you'll join me in revisiting these fine films for some film discussion. Lets get started !!
Posted by Rod Norman at 10:28 AM 1 comments

THAT'S A WRAP ! The12th Ebert Fest behind us 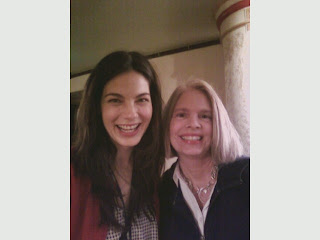 I attended my 10th straight Roger Ebert Film Festival this Saturday, although I only got to catch two films of the twelve films screened. In the past 5 years I've been a pass holder & viewed the normal 8-10 films each year. I really hate it that I was unable to see Pink Floyd's "The Wall", "Apocalypse Now Redux", and missed a chance to meet Charlie Kaufman (who makes very few public appearences). However, just in the short time I was there, I was quickly reminded of what makes this event so special. Before one of the films screened, they showed a short musical montage of musicians around the world. It immediately struck me. This festival always has & I believe always will, celebrates "Diversity". Film makers from around the world come here year after year, to be apart of the love fest of cinema that we call "The Roger Ebert Film Festival". If we could live in a world like the one that exists in those 5 days in Champaign, Il. every April in the Virginia Theatre, well that would be nirvana. I enjoyed another bonus short entitled "Plasic Man" that was voiced over by the German film-maker Werner Herzog. The two feature films we attended were "Trucker" & "Barfly". "Trucker" was one of the most overlooked films of the year in 2008. Michelle Monaghan turned in a performance that was Oscar worthy, as a female truck driver who is suddenly faced with her young son coming to live with her when her ex-husband becomes critically ill. The film also had fine performances from Nathan Fillion (of "Castle" fame), Benjamin Bratt, and Joey Lauren Adams(of Oxford, Ms.,and"Chasing Amy"). My wife & I were able to visit with Michelle Monaghan after the show and she was simply charming. "Barfly" was directed by Barbet Schroeder and based on the screenplay by Charles Bukowski. The film is a loosely based look at Bukowski's earlier days in bars in L.A., fighting, drinking & eventually writing, usually in that order. Mickey Rourke plays the role of Henry (Bukowski) & Faye Dunaway stars as Wanda, his equal in all ways & the love of his life. If you love Charles Bukowski's writing, ( I DO ! ) then you'll probably find this one pretty interesting. Others will hate it. Bukowski wouldn't care either way. Following the film there was a terrific Q & A with the films director Barbet Schroeder. Here was a man who knew Bukowski well and loved to talk about it. A real gem. He was also kind enough to hang around after the show to sign autographs & take photos and visit with guests. As I look back on the past 10 years, all I can say is, "THANK YOU ROGER EBERT". You have made our lives better and we will always be in your debt. With gratitude.
Posted by Rod Norman at 10:18 AM 0 comments