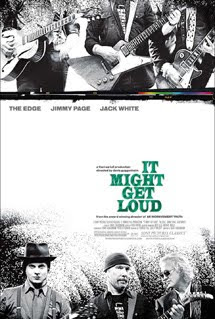 If you've not seen or heard of, "IT MIGHT GET LOUD", and your a music lover, then you need to go to your local video store or Netflix and pick it up immediately. There are so many reasons to see this film, and one is it's a rare opportunity to see into the minds, the techniques and vision of three of the alltime great guitar players:( Jimmy Page of Led Zeppelin, Edge of U2, and Jack White of The Raconteurs and The White Stripes). The three come together on one stage & share their musical influences and events that helped shape & form their lives. I would watch for no other reason than to watch the jam sessions and to watch them perform (The Bands), "Take A Load Off Annie" is worth the price of admission alone. There was so much more however, such as the effect of Irelands violence while growing up on Edge and the fact that Led Zeppelins 4th album which included "Stairway to Heaven and "When The Levee Breaks" only garnered a one paragraph review. The Critics simply didn't get it at that time. It was also enlightening to see the influence The Blues have had on Jack White & that his favorite song is by Son House. Each musician displayed a mastery, intelligence & understanding so comprehensive it was almost zen like or religous in nature. To speak, is to speak through their guitars. They all spoke of learning to play via playing alongside albums as youths. Though their backgrounds were varied, (from the UK to Ireland to Detroit) it was quite obvious they all share one thing...A Clarity of Vision".
Posted by Rod Norman at 7:26 PM 0 comments 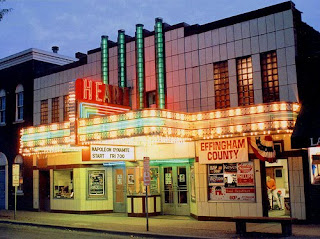 This story really should have been after the one on the Avon because without Skip Huston, their would be no Heart Theatre story. As I mention in my previous blog on The Avon, that fateful day in 2001 changed so many things for Judy & I. In 2003, Skip Huston went into a partnership and assumed control of the Heart Theatre.We opened up on December 12,2003, but after only a few short weeks Skip had to pull out of the deal to concentrate efforts back home in Decatur. Skip turned things over to Chuck Zwick, and Judy & I remained on as Managers of the Theatre over the next 3 1/2 years (2004-2007). I will always truly treasure those years & the wonderful memories we made. The Heart Theatre was opened in 1940, & remained a beautiful theatre until the end. It was built in the Art Deco style with lots of neon out front & a lighted glass brick stairway leading to the upstairs restrooms, that were also done in glass brick & tile of the 1940's style. It was one of a kind & we were very lucky to be allowed to run it as a ART THEATRE during that time. You could see shows in Effingham that you otherwise would have had to travel to a big city like St. Louis or Chicago to see. My top 25 films that we got to bring to Effingham were, (in no particular order ) CITY OF GOD, 21 GRAMS, LOST IN TRANSLATION, NAPOLEON DYNAMITE, SHAUN OF THE DEAD, GARDEN STATE, SAW, LIFE AQUATIC, SIDEWAYS, HOTEL RWANDA, SIN CITY, (a double feature of) KILL BILL 1 & 2, NOTORIOUS BETTI PAGE, WORLDS FASTEST INDIAN, LUCKY NUMBER SLEVIN, JUNEBUG, GRIZZLY MAN, (midnight showing of) THE DEVILS REJECTS, HUSTLE & FLOW, LOVE SONG FOR BOBBY LONG, CRASH, CAPOTE, SHATTERED GLASS, HOUSE OF SAND & FOG, THE STATION AGENT. The sad part is I watched some of those with as few as 10-25 people. Small town America just didn't realize what a special thing they had. We had lower ticket prices & bigger screen than the local multiplex & we did alot of cool events. We hosted "THE HAVE A HEART FILM FEST" where over 4 days we showed free viewings of, (THE MAJESTIC,DRIVING MISS DAISY,HOOSIERS, FREAKS ,EVES BAYOU, MIDNIGHT IN THE GARDEN OF GOOD & EVIL, KILLER KLOWNS FROM OUTER SPACE, TRUE ROMANCE, FERRIS BUEHLERS DAY OFF,ARMY OF DARKNESS,A TIME TO KILL,and A HARD DAYS NIGHT...FOR FREE !! We showed the NCAA TITLE GAME between Illinois & No. Carolina, we had the St. Louis Cardinals playoffs & WS games and Hosted an Oscar Night for 2 years for the Academy Awards. There are some out there thinking yeah, but you must not have shown the blockbusters... well we played the, Passion of the Christ,Phantom of the Opera, Lord of the Rings, Cold Mountain,Casino Royale, Cars, Mystic River, Spiderman 2, Ray, Walk the Line, Lemony Snickett, The Aviator, Million Dollar Baby, Tim Burtons Corpse Bride, The Producers, King Kong, Brokeback Mountain, Pirates of the Carribean 2, Little Miss Sunshine, Shrek 2, Harry Potter films. Documentaries & overlooked such as Shattered Glass, Calender Girls, Big Fish, Fog of War, Touching the Void, This Old Cub, The Story of the Weeping Camel, Supersize Me, Thank You for Smoking,Motorcycle Diaries, Layer Cake, Facing the Giants,March of the Penguins, An Inconvienent Truth, Fahrenheit 9/11 and hosted Effingham Unit 40's Student Film Festival. Probably my favorite thing we did was the Classics we showed: CASABLANCA,WIZARD OF OZ, MODERN TIMES, TO KILL A MOCKINGBIRD, SEVEN YEAR ITCH, GREASE, GODFATHER PT.1, KING CREOLE,GHOSTBUSTERS, ITS A WONDERFUL LIFE, BUTCH CASSIDY & THE SUNDANCE KID, PRETTY WOMAN, SILENCE OF THE LAMBS, COOL HAND LUKE, GRAPES OF WRATH, THE BLACK CAT and THE BLAIR WITCH PROJECT. FOLKS PLEASE !! ....We did all that in a little over 3 years, with a single screen, but we never really caught on here in Effingham. There were alot of things we'd liked to have done if the $$$ had been there, like adding some couches & love seats like the Moolah in St. Louis, & we did briefly add pizza and coffee, to our wonderful gourmet popcorn & concessions & I wanted to add gourmet pretzels but just ran out of time. The memories are GOLDEN, and if you were a film buff in the area around that time..(you know who you are ) we loved spending time with you.I can't finish without saying how blessed we were to have the wonderful staff we had together (Matt Viverito, Kelly Hille, Jenny Power, Morgan Bushur, Amy, Stuart, Louise Johnson, Bernice Walk( we love you & miss you),Tracy Walk, Craig & Brian Minor, Dan Niebrugge ,Nancy Stead, Judy Finke, Rich Hirtzel and Chris. We poured our hrearts & souls into it, and we all worked other jobs as well.All I can say is if you never saw a movie at the Heart during that time,well its your loss. It was truly a golden era of film that will probably never be seen again in this area. SKIP HUSTON..Thank You for making my dreams come true, you will always be "THE MAN"
Posted by Rod Norman at 12:21 PM 0 comments