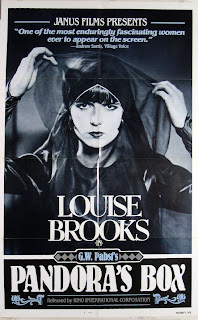 Over this past weekend I decided to revisit a film (Pandora's Box) that I had watched several years ago. Pandora's Box is a forgotten gem of the silent era and it's star (Louise Brooks) is a much overlooked star. Everyone remembers divas Marilyn Monroe, Grace Kelly, Liz Taylor and Jean Harlow but few remember Louise Brooks, and that's a real tragedy. Pandora's Box (1929) is Brooks most famous role, although she appeared in 24 films between (1925-38). It was in this film that she played the role of the femme fa tale "LULU" who reeks of eroticism. Brooks steals the film as her character destroys the lives of every male she comes across with the possible exception of Jack The Ripper. Wearing what would become her trademark hairstyle, "the bob", she uses her sexuality to draw you in & yet conveys a sense of innocence at the same time. She was a fine actress on top of being a sex symbol. Brooks was born in 1906 and passed away in 1985. Throughout her life she displayed other talents as a writer & an accomplished dancer. She even danced with the Ziegfeld Follies at one time. Pandora's Box was directed by German film maker G.W.Pabst and remains a highpoint of German cinema. If your a film buff and your willing to give silent films & BW films a try, start here. I do recommend you seek out the Criterion DVD as opposed to the VHS version. The VHS copy I watched had a pretty annoying musical accompaniment. Criterion is always the way to go as its the Mercedes of film restoration. If you can't find it...you can always borrow my VHS copy. Louise Brooks still looks pretty darn good.
Posted by Rod Norman at 12:43 PM 0 comments 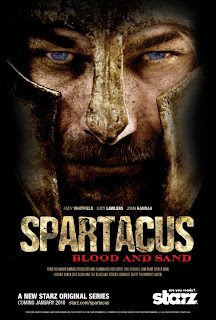 I'm one those people who don't watch a whole lot of TV. Usually, I'm a bit behind the times when it comes to TV series. I don't like to watch a show and then wait a week to see what happens next and we're gone alot. I prefer to wait until something comes out on DVD and then watch all of Season 1 in a couple sittings...or at worst over a couple days. To be honest, there are alot of TV series that I've never seen that would amaze most folks. Such as, Lost, 24, Desperate Housewives, Sex in the City. Oh, and absolutely NO reality TV for me. However, Ive been lucky of late. In the last few months I discovered THE WIRE, CRIME STORY, TRUE BLOOD, BREAKING BAD and now SPARTACUS: BLOOD & SAND. I started watching The Wire Season 5 through Netflix, and I was hooked. Now I'm working my way from the start (Season 1), & working through them a season at a time. I stumbled onto Crime story and was hooked as soon as Dell Shannon's "Runaway" came on. Breaking Bad grabbed me and wouldn't let go. I actually watched it over 1 snow day (teachers perks). Well, last night I came home and got on Netflix Instant and clicked on Spartacus Blood & Sand (Season 1) Episodes 1-3, since I'd heard alot about it but can't get STARZ channel. I was totally blown away. If you took Gladiator, Spartacus & 300 and put them together you have Spartacus: Blood & Sand. Its gritty, sexy, eye-catching. If you get Netflix go watch Episode 1 instantly on your computer and I'm betting you'll be hooked. It's nice to have some variety. Now I have several shows to watch other than (DEXTER, FRIDAY NIGHT LIGHTS & TWIN PEAKS). My previous top 3. If you've never seen some of these that I've mentioned, go check them out, you're in for quite a treat!
Posted by Rod Norman at 11:51 AM 0 comments