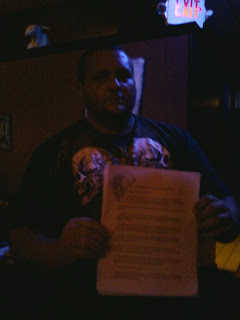 Noir@Bar 4 is now history, but what a night it was! Noir@Bar is always special but this one was extra special, and an unpublished author (not for long I'm sure) really stole the show. Matthew McBride, performed his first public reading at the Delmar Lounge and had the audience in the palm of his hand from the first sentence. Oh, and what a sentence it was! McBride read from a new short story, "GUNPOWDER AND ALUMINUM FOIL", that he only decided hours before the event to read from, and may well have been the funniest crime noir story I've ever heard at a reading. This guys gonna be a star and I'll keep all my "Signs & Wonders" readers updated as Matt progresses, so you'll know where to find his material. There were two things about Matt that really stood out, the first was something Scott Phillips said, "there are alot of hard core crime writers who really have never lived it except in their heads, but this guy is the real deal, a real badass!". The other thing was something that I think is very hard to find, a guy who can write crime with humor. That is a real gift that I don't see many writers doing today. McBride is frickin funny. I mean laugh out loud funny and I for one, cannot wait to read this guys first book. Someone's gonna snatch McBride up very soon and you're not going to want to miss it. If you've read the terrific writer Craig McDonald, whose fictional character Hector Lassiter, "lives what he writes, writes what he lives", well then you you'll understand when I say that Matthew McBride is a living & breathing Hector. And...before you get the idea that maybe Matt stood out because of a weak field, hold up, it's just the opposite, McBride was up against several established hitters like Jed Ayres, Derek Nikitas, and Dennis Tafoya who all hit it out of the park as well. It was just that McBride did it with the bases loaded. Congrats Matt, I'll always be greatful for being there that first time & I'll be looking forward to following your future. A full story on Noir@Bar 4 & photos from the event will be up by the weekend.
Posted by Rod Norman at 6:12 AM 4 comments