Future of the Auto Industry?

We can put a man on the moon, but the best we can do is 28-32 mpg. when it comes to automobiles. Are you kidding me? Is it any wonder that the auto industry is in huge financial trouble these days. Then I see that the Germans are close to putting out a VW that gets 258 mpg.. Their Volkswagen single seater car is supposedly ready to hit the market in Shanghai, China in 2010. The vehicle has gone from conception to production in only 3 years. It's being billed as the most economical car in the world, and will retail for $600 U.S. dollars. The vehicles fuel tank capacity is only 1.7 gallons and would get you 404 miles on a full tank. The car travels at a top speed of 74.6 mph., and the company's headquarters is in Hamburg, Germany. On a website I visited, it states that you could go to Shanghai on vacation, buy 2 of these cars for your wife and yourself, buy one for each of your kids, have them shipped home and still spend less money than if you bought a car at home. If this is for real, it really makes you wonder what we're doing over here. It could be bad news for "Big Oil".
Posted by Rod Norman at 9:11 AM 0 comments 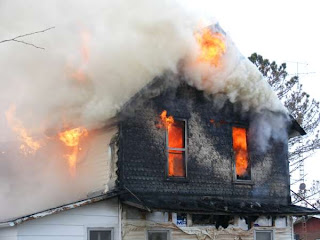 It was sad to see this local landmark burn down a couple weeks ago. It had been a grocery store for over 40 years before being turned into an apartment complex. It held many fond memories for a close friend of mine (Steve Endebrock) who's grandparents had ran the grocery store all those years. Most kids today don't remember these types of grocery stores at all. The ones with all kinds of candy, cool advertising signs, and glass soda bottles filled with grape, orange, strawberry and chocolate. It was also a place you met and talked to your neighbors, a slower place in time, or some might say a better place in time. This place reminded me of a time period that I was into collecting antiques & bottles. Steve and I spent many a day bottle hunting & searching for those metal advertising signs. It brought back alot of good memories, like the time we carried a sign over our heads, in shin deep mud, about a half mile back to our vehicle. We found some pretty cool stuff in those days, original advertising signs for Sunbeam Bread, Dr. Pepper, Shell, Gargoyle and I'll never forget Steve's biggest treasure, a couple sets of hard plastic or ceramic coffee cups with a straw or bamboo weave design inside them. I laughed at the time, but I have to admit I still use the set he gave me some 10 years later. He said they reminded him of the cups he drank out of at his grandmother's house when he was a child. We should all be so sentimental and nostalgic. It's always sad to see another landmark destroyed...but the memories of the past are safe and sound in our hearts and can never be taken from us.
Posted by Rod Norman at 9:09 AM 0 comments

I have to start out by saying that for some reason I just did not want to see this picture. I don't really know why. I had loved Titanic, and everyone I knew who had seen Avatar, had liked it. I mean film buffs I respect like Tyler Renshaw. Maybe it was all the blue people, or all the sci-fi stuff (I'm not a sci-fi guy for the most part). Whatever the reason was, doesn't really matter. I finally gave in this Sunday afternoon and checked out the 3D version (3D is another aspect I'm not crazy about). All I could say was WOW !! It's a long film that didn't seem long and that is always a mark of a good film. The special effects are amazing, but what really got my attention was what the film had to say, and it said alot. I couldn't help but keep thinking of how there was no way this film could have gotten made in J.Edgar Hoovers time. It just wouldn't have been allowed and if it did, James Cameron would have ended up on a FBI watch list. The film is very much a knock on the war in Iraq, with lines something along the way of " If we want something they've got, we just call them the enemy and go take it". Does that sound like oil talk to you ? Another line was ..."we fight terrorism with terrorism". The movie is also about the environment and it's destruction. Yes, James Cameron is a "tree hugger", as some would say. Parallels have to made between the Skypeople and the U.S. Government. There is also a underlying spiritual or religious thing going on here. Avatar is alot of things to alot of people. However, I'd sadly say the majority who've seen it, saw it as nothing more than a great special effects film. I can't wait to here James Cameron's acceptance speech next Sunday. I'm thinking he'll have something significant to say. Finally, is it the best film of the year? I'd say no..my vote still goes to THE HURT LOCKER, a film that shows us what our brave military men are dealing with on a daily basis. Huh, two war films battling it out for best picture...interesting.
Posted by Rod Norman at 9:07 AM 0 comments

Let me begin by saying that I'm 44 years old and most people would consider spending a day on the road with their mother (at that age) a pretty uncool thing to do. Perhaps, but then again, my mothers not the typical Mom. My wife had to work Saturday and my mother was in town to visit us for the weekend. No problem, we grabbed all my (Tom Russell, Slaid Cleaves, Jim White & Leonard Cohen CD's) and hit the road. We drove through some great towns along the way (Greenville, Hillsboro, Leitchfield) before we ended up in Girrard,Il. at the Deck Bros. soda shop and bookstore. We grabbed root beer and chocolate floats from the 50's soda shop and I picked up Woody Guthrie's, autobiography "Bound for Glory" at the bookstore. We had a very interesting conversation with the legendary Deck brothers, about the history of the area, books & the two buildings they own. From Girrard we were only 4 miles from Virden, Il. ( a town I wrote about only a couple weeks ago) and the SLY FOX and BOOKS ON THE SQUARE bookstores. We spent the afternoon in these two shops buying books and chatting with George at the SLY FOX & John and Jeannie Alexander at BOOKS ON THE SQUARE". I found some brand new mystery 1st editions still on the shelf from the late 90's of (Charlie Stella, Vicki Hendricks, Ace Atkins,Jason Starr and Ken Bruen)at the SLY FOX, and some wonderful vintage paperbacks of (Dashiell Hammett,Raymond Chandler,Rex Stout, Jim Thompson,Graham Greene,Dorothy B. Hughes, and William Faulkner) at BOOKS ON THE SQUARE. Funny... but both stores owners said we were the best customers of the day. That's probably why I'm always broke. If I could eat my books, I'd weigh a thousand pounds! Before we left town we stopped at the corner gourmet coffee shop and grabbed some terrific cappuccino's and a bag of Dutch Apple coffee beans for later. The latter part of the day didn't go as scripted. We left Girrard headed for Decatur, but we ended up in Springfield, looking for a restaurant that she had seen featured on one of her favorite cooking shows. The kicker is, she couldn't remember the name or address... but she did remember it looked like a Quonset hut. After 45 minutes of searching downtown Springfield to no avail, we gave up. We settled ( if you can call it that), for the Rt.# 66 icon, "THE COZY DOG". I've been several times, but it was her first time and was quite a treat. This is a must stop on any Rt. #66 trip and was the origin of the corn dog. Make sure you order the homemade fries as well. It was now getting dark, so we headed home through Decatur,Il. We did stop at Best Buy, Hickory Creek Mall, and a going out of business sale at Hollywood Video. It was there that I found a Leonard Cohen DVD. We made a pass by the Avon Theatre to see what was on, but decided to pass this time. We got back to the house about 9:30 pm ( or about 12 hours after we'd started). It was a great day and just proves it's not that unhip to spend time with Ma!
Posted by Rod Norman at 9:03 AM 2 comments