He could be your new best friend !!

I'm always looking out for worthy causes & this is one of those. After I did an interview with Tom Schreck, I asked him if he could give me someone who could pass on some info in regards to helping save abused or abandoned animals. Soon afterward, I heard from the wonderful Jen Forbus, who sent me this address www.theanimalrescuesite.com for anyone out there wanting to help save an animal like the one above. Please have a heart, if your in need of a pet, contact this terrific website and find a new best friend.
Posted by Rod Norman at 7:30 PM 0 comments 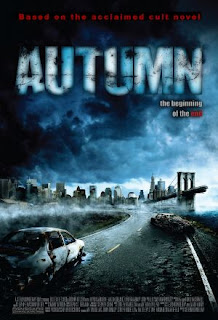 David Moody's "Autumn series, (5 books) has become a cult phenomenon. When "Autumn" was completed David had a choice, find a publisher or make it available on-line for free. He chose the later and that led to over half a million downloads. The rest of the series was published by INFECTED BOOKS, which David controlled. Unfortunately that has led to a problem for most U.S. readers. The books are long out of print and can only be found in the secondary market, often for hundreds of dollars each. However, there is good news around the bend. The series will become available in the U.S. beginning in Sept. of 2010 when "Autumn" (the 1st in the series) will again roll off the presses. The (2nd-4th) books in the series, will be released throughout 2011 here in the U.S. Jump on board now, because both of his series, will be the next "HOT" thing, over the next couple years.

The movie based on the novel, by the same name "Autumn" was released today in the U.S. I immediately rented it and just finished viewing it moments ago. I will warn you, it is not your typical zombie movie and you will probably enjoy it, or hate it. The movie sticks closely to David's book, however it was shot on a very small budget and it really need subtitles here in the U.S.
The acting, which includes the recently deceased David Carodine (in a small role ) and Dexter Fletcher ( of Lock Stock and Two Smoking Barrel's & Layer Cake) is somewhat average and the audio could be better. BUT.. if you love films from the past such as, "The Day of the Triffids", or "Night of the Living Dead" then you'll love it. Keep an open mind, overlook the deficiencies and just relax and enjoy David Moody's post apocalyptic tale of of a viral plague that kills billions, but soon see them come to life and begin to evolve. Not your typical zombie movie. A matter of fact, it is light on the gruesome side until well into the movie and even then it's only briefly. This is a "thinking mans zombie" and a story only David Moody could tell.

David's new series "Hater" will be out in paperback in April & the 2nd in the 3 book series, (Dog Blood) will be out in the U.S. on June 8th. "Hater" was brilliant and was among my "Signs & Wonders" top 10 novels of 2009. "Hater" has already been optioned & is in production and will be directed by Guillermo del Toro, ( of Hellboy 1 &2, Pans Labyrinth, The Hobbit) and will be a don't miss I promise you. This one will get the money thrown at it to do it the justice David's books deserve. You may also catch up on David Moody if he's new to you, at his website http://www.djmoody.co.uk

Please stay posted tuned to "Signs & Wonders", as we will have an interview with Mr. Moody coming in late April or early May. "Jay-sus", that will be worth waiting for.
Posted by Rod Norman at 5:10 PM 0 comments