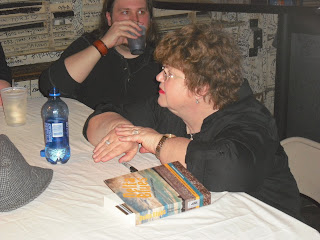 Just in time for tonight's debut of Season 3 of "True Blood", comes this hot new interview with the wonderful author of those Sookie Stackhouse novels, Charlaine Harris. Charlaine is one of the sweetest writers you could ever hope to meet and is the author of numerous series, including the Sookie Stackhouse, Harper Connelly, Aurora Teagarden,and Lily Bard novels. I hope you enjoy this interview half as much as I did in doing it. I also want to thank Dannielle Harden, my step daughter for her assistance in preparing for this interview. Enjoy!! Interviewer: Rod Norman


1) Have you been pleased with the TV series, and does it bother you when "True Blood" strays from the books. Also, what kind of an impact has it had on your book sales overall?

CH) I am delighted with “True Blood.” The third season is going to be amazing! I went to the premiere this week and saw the first two episodes. I knew that the TV show would have to be different from the books, since the books are all told from the first person point of view, and a TV show can’t be filmed that way. Though the books were already on the bestseller list, the show has had a huge impact on my sales, which is also delightful.

2) You recently made a cameo in the finale of Season 2, what was that like for you & is it something you would like to do again?

CH) I wouldn’t mind, but I’m not driven to repeat the experience. It was a fascinating day on the set, because I observed how much work goes into a very few seconds of film. It’s always fun to see the actors and have a conversation with them; they’re all so talented.

3) Who does the art work for your dust jackets on the Sookie books & do they do your other books as well?

CH) Lisa Desimini does the artwork for the US covers, and I think the very difference of them got the books noticed initially. She also does the reissue covers for the Aurora Teagarden books, and I think the Lily Bard books also.


4)It seems to me you must have had some interest in Greek mythology at one time in your life. Would that be true and if so how has it impacted your writing?

CH) Yes, I was very interested in Greek and Roman mythology when I was in my early teens. I think you can see how that’s impacted my writing. There are some useful archetypes there.

5)Your leading characters are all strong women, have you considered writing something with a man as the lead?

CH) Not seriously. Sooner or later I’ll do that, but I really like writing strong women. Though they’re not always strong in the same way.


6) Did you always want to be a writer from an early age or was it something that just evolved over time?

CH) No, I always wanted to be a writer. I’m so fortunate that I was able to live my dream.


7) What are some of your favorite southern cities?

CH) New Orleans , of course. I’m also fond of Memphis , since I grew up near to it; Atlanta , where I have a lot of relatives; Houston, home of my favorite bookstore; and Dallas , where one of our sons lives.


8) I know author's love all their characters, even the ones they hate, its like their children. But, do you have a favorite or couple that you just love to write about?

CH) I love writing Dahlia Lynley-Chivers, who’s featured in several of my short stories. She also makes a guest appearance in one of the Sookie books. Pam is also one of my favorites. You can tell I like ruthless and sarcastic.


9) One of the best things about your characters is the way you make them relate able & real. Do you base some of them off of people you know or have met, or are they just composites melted together in your imagination?


10) One of the biggest discussions among Sookie fans is, who will she be with in the end...Eric or Bill? Do you yourself even know at this point how it will end or is that something that you'll just know when you get there or is it constantly changing directions?


11) Harper Connelly is a terrific series, have you been approached to do a TV series or movies about her?

CH) Yes, I have. We’ll see what happens.


12)So, how was the True Blood premiere in L.A. , can you ever tire of walking on the red carpet?

CH) Yes, you can. But it’s always nice to see the crew and cast involved in the show, and it’s been lovely to treat my family to an experience so out of the ordinary. However, answering the same questions over and over on the red carpet can be stressful and tedious.


13) When can we expect to see the "Dahlia" game hitting the market? Your thoughts on it as well.

CH) Oberon has sent me a timetable, but in case something slips, I think you’d better ask them questions. I’ve seen some of the artwork, and I’m delighted with it. The scenarios sound like fun to me; I plan on playing it myself.


14) You have a new T-shirt coming out w/ Harper Connelly and I believe the profits go to PROTECT, a children's protection service. How did you become involved with this cause and where can people buy this T-shirt and help kids at the same time?

CH) I am honored to be associated with PROTECT, a cause sponsored by Andrew Vachss, whose writing I really admire. I was approached by his people when they found I was a fan of his, and I gladly agreed to add Harper T-shirts to the fundraising effort. Go to my website and click on the link, and you can purchase one of the shirts.


15)Do you still get a kick out of attending events such as Bouchercon, Comic Con & other author events or are getting to the point where it's just nice to be home?


16) Some of your fans may not not know that you sing some mean back up vocals. As was witnessed at the Delta Blues book launch where you helped back up Nathan Singer. ( I have pictures to prove it) ha.. Was that a one time thing or would you enjoy doing something like that again..any formal training in your musical background?

CH) Thanks, that’s an unexpected compliment! I had an excellent time in Clarksdale , and it was fun doing something so different and seeing the talents other writers have besides their writing. I’m pretty sure that was a one-time thing, but it was an amazingly freeing event.


17) Why did you feel comfortable selecting Alan Ball to adapt your books to TV?

CH) I think Alan is a genius. And I knew he got the combination of humor, horror, and violence contained in the books.


18) Where did the idea of combining a telepath and a
vampire come from?

CH) I figured a sane woman would have to have a disability to be interested in dating a vampire. That was my core idea.


19) It must have been extremely difficult keeping several series going simultaneously, trying to keep everything straight. I believe you once compared yourself to a Chinese acrobat juggling plates. Did you ever consider having them cross paths at some point? Such as Roe & Harper?

CH) Lily appears briefly in the Sookie books. But Roe’s world is too different to cross over with the others, and the reason Lily’s appearance was brief was that her world and Sookie’s just don’t mesh.


20) Any chance we will see Amelia again in future Sookie books?

21) How much longer is Harper going to refer to Tolliver as her "brother" ?


22) Vampire politics can be confusing, have you ever thought of creating a family tree like system to explain all the different branches of their government?

CH) I haven’t, but other people have. Maybe one such chart will be in the SOOKIE COMPANION.


Final Question: In "True Blood", Jason says to Andy "This town might be full of dumb asses and rednecks, but their still Americans"... does that sum up our country?

CH) I don’t think so. I think it’s funny, but a vast over-simplification.
Posted by Rod Norman at 7:16 AM 0 comments