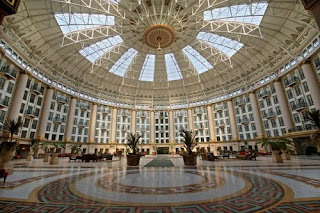 With Valentines Day just around the corner, a co-worker (Lisa Bories), got me to thinking about romantic hideaways. Lisa asked me if I knew anything about French Lick, because her & her husband were thinking of going there for Valentines weekend. Actually I did since Judy & I had been there a couple years ago. Forget French Lick & head up the road a couple miles to West Baden Springs Hotel, and into the lap of luxury. Billed as the "8Th Wonder of the World", when it was built in 1902. It boast a 6 story atrium & a wraparound sitting area complete with the huge white rocking chairs. Its grounds are well manicured & stunning in the summer time. In the 1920's it was host to sports stars, presidents, gangsters, and the social elite. It was a favorite getaway of Al Capone's. It was famous throughout the U.S. for its "sprudel water" with its supposed powers to heal. In 1934 it closed due to the Great Depression and would later become a Jesuit seminary and a college campus before closing for good in the 1980's. After years of sitting in disarray, a 30 million dollar renovation project (1996-98) was put in place to restore it to its original grandeur. Today it host's over 400+ rooms, a casino, and has to be seen to be believed. It is quite pricey at over $300 a night. However, if you have the means, definitely take your sweetheart and you'll feel what those in 1st class on the Titanic must have felt like...but this place won't sink. Bon Voyage !
Posted by Rod Norman at 6:41 PM 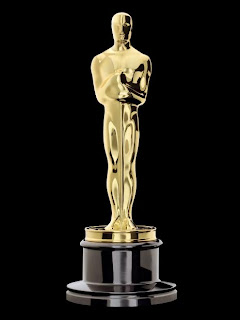 The nominations are out, so whose gonna win the hardware? Their are all kinds of experts making predictions, but I gotta say I've got a pretty good track record myself. Over the past 7 or 8 years I've had about an 90% success rate and even predicted that Crash would win best picture. So here's the deal... I'm gonna attempt to tell you who will win, and who I feel should win, in the 8 major categories. Lets start with who will win: Best Picture "AVATAR", Director "KATHRYN BIGELOW" , Actor "JEFF BRIDGES", Actress "SANDRA BULLOCK", Supp. Actor "CRISTOPF WALTZ", Supp. Actress "MONIQUE", Adapted Screenplay "JASON REITMAN", Original Screenplay "QUENTIN TARANTINO". Now.. who should win in my humble opinion? Best Picture it's hands down, "THE HURT LOCKER", Director "KATHRYN BIGELOW", Actor "JEFF BRIDGES", Actress "MERYL STREEP", Supp. Actor "CRISTOPH WALTZ", Supp. Actress "MAGGIE GYLLENHAAL", Adapted Screenplay "BLOOMKAMP & TATCHELL" for District 9, Original Screenplay "The COEN BROS." I really want to see The Hurt Locker win the best picture award. I'll also be thrilled to see Jeff Bridges finally get the award he so richly deserves. However, if Jeremy Renner would win.. I'd be happy for him, but its Mr. Bridges time. I also, find it pretty cool to see James Cameron up for Best Picture & Director awards against his ex-wife Kathryn Bigelow. It should also be noted that no woman has ever won the Best Director award.. until now! It is also, the first time for an African American (Lee Daniels) to get nominated in that same category. One of my favorite movies of the year was "CRAZY HEART". I'd loved to have seen it get a best picture nod. It didn't, but the title track "The Weary Kind" by Ryan Bingham & T-Bone Burnett did for Original Song. I hope it wins. If you haven't heard the soundtrack from Crazy Heart, you should race to buy it. It is terrific and you'll be amazed at the vocal abilities of Jeff Bridges and Colin Ferrell.
Posted by Rod Norman at 5:48 PM