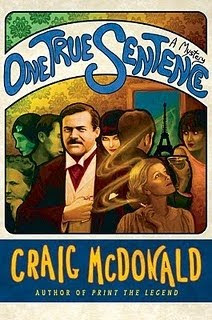 
Craig McDonalds fourth novel in the Hector Lassiter series, ("One True Sentence") comes out Feb. 14th, and you'll want to pick this one up immediately. I've been a big fan of Craig's ever since reading "Head Games" , the debut in the series. That affection has continued with "Toros and Torsos" and "Print The Legend". However, to me, this is Craig's masterpiece. Set in Paris in 1924, Hector finds himself and best friend Ernest Hemingway caught up in a series of murders of literary magazine editors. A wonderful cross of fiction and non fiction, you feel transported back in time to The City Of Lights and the Lost Generation. McDonald blends the fictional pulp writer Hector Lassiter, into a world of non fiction characters such as Gertrude Stein, Alice Tolkas, Aleister Crowley, Man Ray, and of course Hadley & Ernest Hemingway. McDonald humanizes these literary icons like only he can. I have always found the Lassiter novels to be intelligent, rich and thought provoking, but "One True Sentence" takes the series to a new level and establishes this series as one of the best things going. This one has it all, mystique, intrigue, mystery, erotica, murder, the occult. I don't want to give away too many plot points, but lets just say that there are a ton of twist & turns and Hector's love life is down right steamy. Who knew that Craig McDonald could write erotica this good. Simply put,I did NOT want to put this one down and did not want to see it end. I cannot wait for the fifth book to come out and yet we're still 8 days away till the fourth ones official release date. Well, it's that good, and it leaves you thirsting for more. For those who have never read any of the Lassiter novels, it is not necessary to start at the beginning with Head Games. Each novel is self sufficient, but if you do read them in order, I really believe you'll find this one to be Craig's crowning achievement. This is also the last of the Lassiters that Hemingway appears in. We will be looking forward to more Brinke Devlin in the days & years to come. Brinke, a Louise Brooks clone, becomes the love of Hector's life but could also be the murderer.
Posted by Rod Norman at 3:00 PM 1 comments