"ONLY THE GOOD DIE YOUNG" 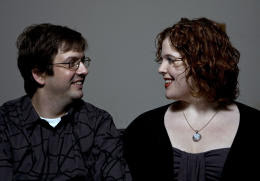 David Thompson was amazing, inspiring, a true friend, a publisher, bookseller, reviewer, a husband, so much to so many. I for one miss him very much and for those who have known him longer & even better...your hearts have to be breaking. I have put off writing my own tribute to David since his passing on Sept. 13 until I had time to find the peace and quiet necessary to write from the heart the things I wanted to say. I was fortunate to get to know David over the last couple years thanks to Ken Bruen and Reed Farrel Coleman. David made my world a much more enjoyable place to be. David sold me alot of books,and David refered me to alot of new authors. He was a champion of many authors in the mystery field. He worked diligently at keeping many authors books in print. His publishing company BUSTED FLUSH PRESS (recently purchased by Tyrus Books) was amazing. It championed wonderful authors such as ACE ATKINS, KEN BRUEN, DANIEL WOODRELL, and REED FARREL COLEMAN..some of personal favorites. But it was David's warm personality that won your heart. I finally met David in person for the first time at Bouchercon in Indianapolis last year after a couple years of phone calls, e-mails and texts. I was a customer yes, an avid book collector yes, but in the mystery field or book world I was a nobody, and David treated me like a somebody. Not just a somebody, but like a important somebody. We shared a passion for books, a love of reading, of authors and films and a love for life and that's all that mattered. The last phone conversation we shared was when David called very excited about a couple new authors with debut novels that he wanted to let me in on. The one he was most excited about was John Verdon's "Think of a Number" and went into detail as to the plot of the book. He said that Mr. Verdon wasn't going to be doing any book tours, but he would be signing copies for Murder by the Book and did I want one. Most definitely I did, because if David recommended it, you knew it was gonna be good and worthy. So, I find it fitting that as word spread and I heard of David's passing, that I was reading , "THINK OF A NUMBER" ,and as always he was right. There will be know one to replace David Thompson, for he was irreplaceable. He loved what he did and wanted nothing more than to share that with you...YOU being everyone. And, as I write this tribute and tears flow, my heart breaks like so many others out there for he belonged to all of us, the big and the small. He will remain in our hearts forever and just a thought of him brings a smile. However, the world just became a little colder place when your flame blew out. Gra Mor,and until we meet again, may you rest in peace.
Posted by Rod Norman at 7:17 PM 0 comments